Cancer and How Not to Get It | NutritionFacts.org 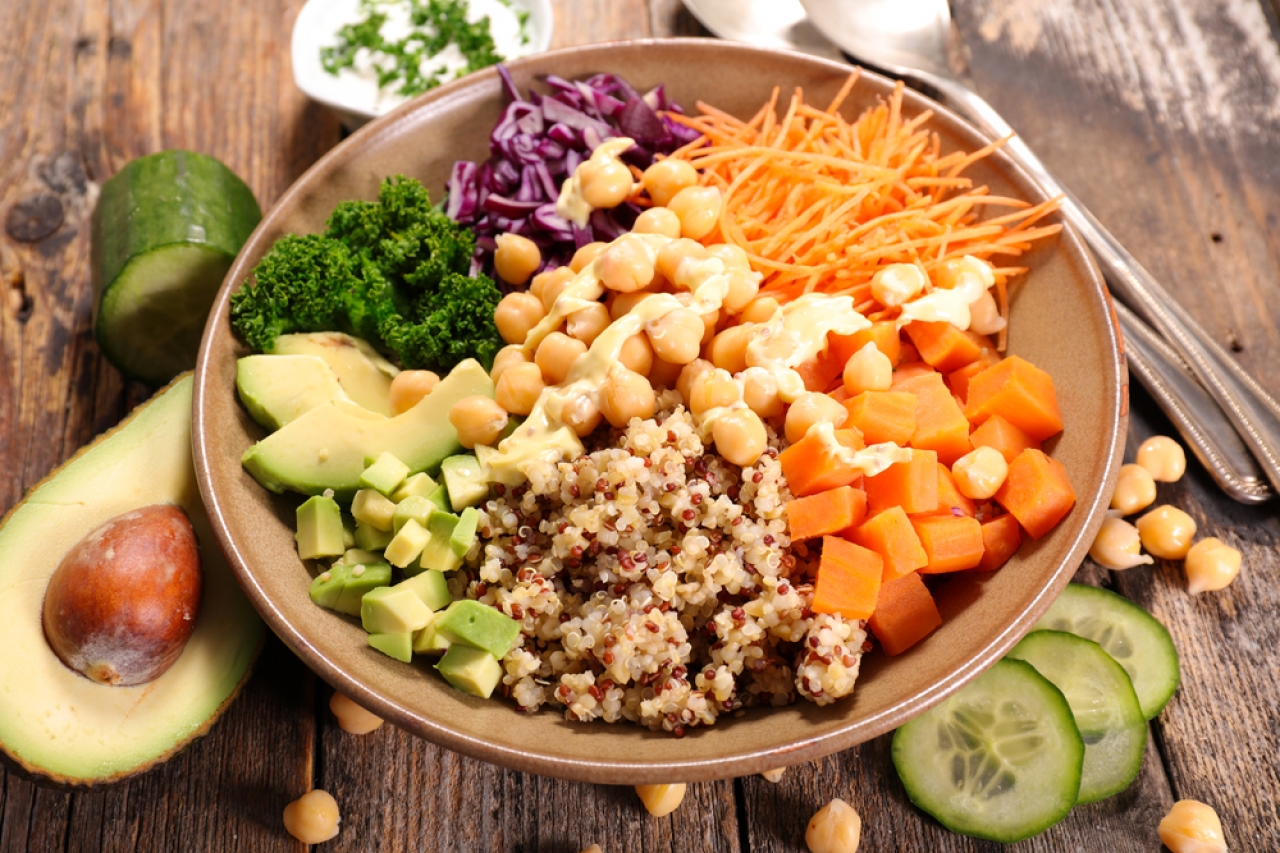 There are lots of things you can do to reduce your risk of getting cancer. Avoid tobacco, exercise, maintain a healthy weight. But one of the simplest kinds of cancer prevention – is to follow a healthy diet.

“The vast majority of cancer research is devoted to finding cures, rather than finding new ways to prevent disease.” And the results of these skewed priorities are plain to see: 2021 is the 50th anniversary of Nixon’s declaration of war on cancer, and the death tolls from the most common forms of cancer in the United States have continued unabated.

“We have been looking at the very nature of cancer in the wrong way.” Breast cancer doesn’t begin when a lump is first detected. All the common cancers like lung, colorectal, breast, and prostate (which account for the majority of deaths) have a long latency period—often 20 years or more. So, it’s not like you were healthy, and then one day you got cancer. You haven’t been healthy—you’ve had cancer growing in you for decades. Indeed, there’s a bizarre misperception that people are “healthy” until they have actual symptoms of invasive cancer. But “[t]he barn in which hay is smoldering before it bursts into flames is not a safe place.”

What about using diet and nutrition to prevent and treat cancer? Okay, but what kind of cancer? There are more than 200 types of cancer. Ah, but they all share the same hallmarks. In a series of papers cited more than 40,000 times in the biomedical literature, ten hallmarks of cancer have been identified.

Increased sensitivity to growth factors; evading your body’s tumor suppressors; dodging your immune system; being able to grow forever; tumor-promoting inflammation; the ability to invade and spread and hook up its own blood supply; the accumulation of DNA mutations; disarming the self-destruct mechanisms in place; and hijacking the cell’s metabolism. And yes, of course, there are classes of drugs to try to counter each one—chemotherapy agents designed to target each piece of the cancer puzzle.

Now ideally, there would be drugs able to target multiple hallmarks at the same time, but that’s not how drugs tend to work. And this is one of the major reasons why, in the context of cancer research, there are so many proponents of investigating plant foods, as they can deliver a cocktail of bioactive compounds—bioactive compounds that may target most, if not all, of the hallmarks of cancer. Compounds found in fruits and vegetables such as berries, greens, and broccoli, shown to be able to target each of the ten hallmarks of cancer––at least in a petri dish.

Moreover, they ﬁt the characteristics of an ideal chemopreventive agent. If you were to design the perfect candidate, you’d want them to be selective for cancerous or precancerous cells while leaving normal cells alone, be side effect-free, target most types of cancers, be able to be consumed as a part of a daily diet, be conveniently available almost everywhere, and be relatively inexpensive to boot. And plants have all of these. So, no wonder those eating more plant-based tend to have lower cancer rates.

However, it should be understood that we’re not talking about taking supplements containing extracts or puriﬁed phytochemicals, but rather eating whole plant foods themselves; more of a food-system based approach to targeting the hallmarks of cancer. Foods contain many thousands of substances that lead to vast numbers of possible interactions, yet much of nutritional science has long been directed towards the impact of single dietary components. Yes, this kind of ‘reductionist’ approach can reveal the role of individual nutrients or foods in the development of disease, but let’s think about what the optimal research strategy would be to study the effects of bioactive natural plant compounds on disease prevention. Instead of using isolated phytochemicals in the management of cancer, how about using whole foods, because sometimes the whole can be greater than the sum of its parts, a concept known as food synergy.

Check out this study. The simultaneous inhibition of a series of cancer stages in breast cancer cells using a phytochemical super-cocktail. Two breast cancer cell lines were treated with six different plant compounds individually, and then altogether, at the level you might find in your bloodstream after eating foods like broccoli, grapes, soybeans, and turmeric. And while the compounds were ineffective individually, in combination they significantly suppressed breast cancer cell proliferation by more than 80 percent, inhibited cancer cell migration and invasion, stopped the cancer cells in their tracks, and eventually killed them all off. The plant compounds did all this without having any deleterious effects on the normal noncancerous cells used as control.

No wonder the foundation of cancer prevention, based on an update of the most extensive report on diet and cancer ever published is not pills, but plants. Cut down on alcohol, soda, meat, and processed junk, and center your diet around whole grains, vegetables, fruits, and beans.

In our next story, we look at whether choosing organic over conventional foods could protect against cancer.

In a review updating the evidence on human exposure and toxicity of pesticides, the body of evidence linking pesticide exposure and cancer is said to be so huge that the role of pesticides in cancer development can no longer be doubted. But most of the evidence that shows DNA damage from pesticides is from occupational exposure among farmers and workers in the fields, the pesticides industry itself, or those living in high-spray areas. There is evidence linking non-occupational exposure to pesticides to DNA damage—in this case single- and double-stranded DNA fragmentation in sperm of men with higher levels of pesticides flowing through their bodies. But that was in China, where the average pesticide concentrations are as much as four times higher than in some other parts of the world.

Another way pesticides could potentially facilitate tumor growth is through adverse eﬀects on anticancer immunity. NK cells––natural killer cells––are our body’s first line of white blood cell defense against cancer cells and virus-infected cells. And pesticides have been shown to induce harmful eﬀects on these defender cells, reducing their ability to kill off tumor cells. For example, if you put a bunch of natural killer cells in a petri dish along with human leukemia cells without any pesticide, your natural killer cells can clean house, and wipe out more than half of the cancer. But if you drip a tiny bit of pesticide on them, your NK cells are so disabled that the cancer wins the day. Okay, but how much pesticide are we talking? The researchers used the maximum level found in those actively spraying pesticides. Most of us, however, are privileged enough not to be forced into such a job. So, what about looking at just the residual pesticides left on conventional produce? Is choosing organic for cancer prevention worth the investment?

“In the United States, more than 90 percent of the population has detectable pesticides in their urine and blood,” regardless of where they work or live. And we know it’s from the food we eat, because crossover trials where people are switched between consuming conventionally grown and organic foods show you can turn on and off urinary concentrations of pesticide metabolites like a light switch. But that doesn’t necessarily mean the pesticides are harming you. The health consequences of consuming pesticide residues from conventionally-grown foods remain unknown. But a recent study did find that those who self-reported the highest frequency of organic food consumption had about a 25 percent lower risk of getting cancer.

And here it is: the first of its kind to evaluate the association between frequency of organic food consumption and cancer risk, controlling for a wide array of other factors. Doesn’t it matter that organic consumers are younger? The researchers controlled for that, and still found significantly lower cancer risk. Okay, but maybe organic consumers get less cancer because they’re more affluent, or more highly educated, or are skinnier, or exercise more, or eat less meat, or smoke less. Nope, they controlled for all that, and still found significantly lower cancer risk in organic consumers. Maybe their diets were different in other ways, though—more fruits and vegetables overall, or less junk food. Nope, they still found significantly lower cancer risk. They concluded: “Our results indicate that higher organic food consumption is [indeed] associated with a reduction in the risk of overall cancer.”

This is the most sophisticated study of its type to date, but there was an earlier study that was even bigger. And little evidence was found for a decrease in the incidence of all cancers except for perhaps one kind of blood cancer—non-Hodgkin lymphoma. Here are the data. No difference in cancer overall between those who never choose organic and those who usually or always do, with the only significant findings were a lower risk of non-Hodgkin lymphoma and an increased risk of breast cancer. Is it possible that women who choose organic food are more conscientious about getting screened for breast cancer, and that explains the higher diagnosis rate? We really don’t know.

Of course, what we care about the most is not just cancer, but so-called all-cause mortality, the risk of dying prematurely, period. And higher blood levels of a pesticide known as beta-hexachlorocyclohexane are associated with living a significantly shorter life.

How do we cut down on our levels? Well, there was a study done way back when that found that the breast milk of a vegetarian mother was found to have less beta-hexachlorocyclohexane than the milk of her sister, who was also breastfeeding at the time, but included meat in her diet. The vegetarian sister apparently had levels of that pesticide that were lower by about a third, compared with her omnivorous sibling. No surprise, since this class of chlorinated pesticides are fat-soluble, and so they’re found most frequently in foods of animal origin.

A more recent study failed to look at beta-hexachlorocyclohexane, but they did find that chlorinated PCBs were associated with increased mortality risk. And again, the toxins were found in the same kinds of foods: dairy products, eggs, and animal fats. So, no surprise, the blood of those eating vegan was found to be signiﬁcantly less polluted than omnivores, regarding a whole series of PCBs––including those found in the study to be associated with increased mortality. But the vegans did not have lower levels of β-hexachlorocyclohexane.

The bottom line is that if you’re worried about the adverse health effects of pesticides and pesticide-type compounds, you may want to lower your intake of animal products. But when it comes to fruits and vegetables, the benefits of consuming conventionally grown produce are likely to outweigh any possible risks from pesticide exposure. And so, concerns over pesticide risks should not discourage us from stuffing our faces with as many fruits and vegetables as possible. That would give us a huge health benefit, whereas the potential lifelong damage of any pesticides on those same fruits and veggies has been estimated to only cut a few minutes off a person’s life, on average, which is nothing compared to the nutritional beneﬁts of eating more fruits and vegetables.