What to Know About Running and Rheumatoid Arthritis 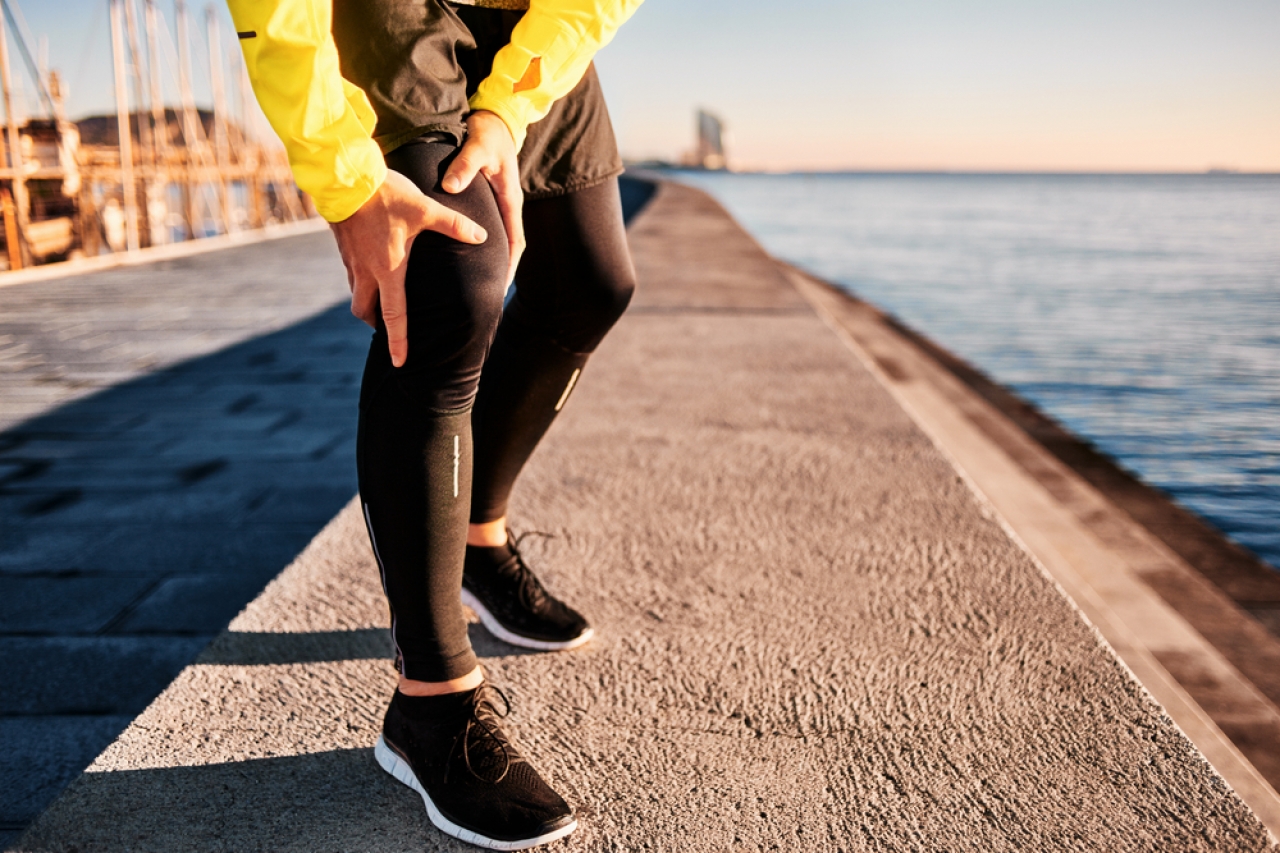 Any runner would be proud of the running accomplishments Christine Conti has achieved. She has completed two Ironman triathlons, a 100-mile ultramarathon and most recently Conti, 42, ran her ninth Boston Marathon, finishing in 3:29:03. Making it more impressive is the fact that she has completed all these races after she was diagnosed with an advanced form of rheumatoid arthritis (RA) in 2010.

Rheumatoid arthritis is an autoimmune disease, meaning instead of the immune system protecting you from foreign invaders like bacteria and viruses, your body attacks itself. This results in inflammation, particularly in the joints for those with RA, and may also affect organs like the heart, lungs, and eyes.

While not everyone with rheumatoid arthritis will be able to (or choose to) regularly run endurance races, this condition doesn’t have to prevent you from doing so either. In fact, running—and more generally, physical activity—can be beneficial in the management of RA.

Here’s what you need to know about rheumatoid arthritis and running.

Researchers are not sure of the cause of rheumatoid arthritis but think it may have to do with a combination of genetics and environmental factors (like bacteria or viruses) or physical or emotional stress that triggers its development. If you have a family member with RA, you may be more likely to develop the autoimmune disease.

Certain health behaviors may also play a role in the risk of developing rheumatoid arthritis. According to a 2019 review study published in Clinical Therapeutics, several lifestyle factors affect RA risk. “Non-smokers, people who quit smoking, people who lose weight, people who are active, people who have a quality diet—they all have lower risk of developing arthritis,” one of the study’s authors, Jeff Sparks, M.D., a rheumatologist at Brigham and Women’s Hospital and assistant professor of medicine at Harvard Medical School in Boston, tells Runner’s World.

This is good news for runners who generally have or are trying to improve many of these behaviors. However, even if some of your other lifestyle behaviors could use more work, keeping active can still lower your risk of developing the disease. Another study published in 2019 in Arthritis and Rheumatology, which Sparks also co-authored, showed that women who spent more time exercising had a lower risk of RA, independent of other risk factors like smoking, BMI, and diet.

According to the National Institutes of Arthritis and Musculoskeletal and Skin Diseases (NIAMS) symptoms of RA commonly include:

The symptoms of rheumatoid arthritis may be difficult for runners to identify, considering most of us experience aches during training. “As an athlete, you are used to pains and aches and probably sprains and just normal injuries,” Conti tells Runner’s World. “It happened over about a year where I started noticing that I’d get up and my hands would be sore—almost as if I lifted really heavy weights or like I pulled muscles... And I just thought, ‘Am I a former athlete who’s just getting old or maybe I’m overdoing it in the gym?’”

Even after the pain worsened, Conti started dropping things and had trouble typing and buttoning her clothes. It was only after her sister insisted her swollen hands were not a normal athletic injury that she made an appointment to see a doctor.

It can be difficult to diagnose rheumatoid arthritis, especially in its early stages, because there is no single test to confirm the presence of the disease and symptoms vary from person to person. The overlapping symptoms with orthopedic injuries sustained by runners can further complicate things.

Sparks acknowledges, “It can be easy to attribute symptoms to repetitive injury from things like running. So I think patients really need to emphasize that these are symptoms that are out of proportion, that are lasting longer, that are involving joints that aren’t part of [running]. If it’s happening in joints beyond the feet, for example, that wouldn’t be explained by running. So it is just a bit of awareness on both sides—the physician and the patient—about the need to think beyond just sort of local joint syndromes [and] to think about a more systemic problem like rheumatoid arthritis.”

However, Sparks also notes there are some specific tests of antibodies in the blood that are strongly linked to RA, and that in combination with a person’s medical history, physical exam, and sometimes X-rays or other scans can provide the information needed for a diagnosis.

While there is no cure for RA, medications make rheumatoid arthritis treatable, allowing patients periods of remission and stopping inflammation, or reducing it to the lowest possible levels. Disease-modifying anti-rheumatic drugs (DMARDS) work to slow the progression of the disease and can come in various forms including infusions, injections, and pills. Steroids, like prednisone, and non-steroidal anti-inflammatory drugs, like naproxen or ibuprofen, don’t alter the disease progression, but can be used to manage symptoms in the short-term while the DMARDS get to work.

In addition to medications, you can help to further manage your RA symptoms with behaviors like eating a healthy diet, stress and mental health management, and physical activity.

A review published in 2016 in the journal Joint Bone Spine showed both physical and mental health benefits of different forms of exercise, including running, in patients with rheumatoid arthritis. Staying active may improve bone and joint health, reduce inflammation throughout the body and improve cardiovascular health, which according to Sparks (who was not involved in this study) is important to maintain in patients with RA, because they are at a higher risk of cardiac events than the general population.

According to the study, physical activity may also improve quality of life in patients with rheumatoid arthritis by increasing self-esteem, alleviating depressive symptoms, improving sleep quality, and decreasing the perception of pain.

Despite being an active person, Conti, who lives in Brick, New Jersey, only started running after her RA diagnosis to fill a psychological need that other exercise could not meet. “I wound up really falling in love with the piece that came with going out for a jog. Even if I didn’t feel well and I had to stop and walk a little bit, it was okay. That was the self-care that it took for me mentally to get through feeling sick and keeping my mind going forward,” she shares.

Receiving a diagnosis of RA does not mean hanging up your running shoes. Sparks explains that there is no one-size-fits-all approach when it comes to treating RA, including determining what types of exercise are best for you. If your RA affects mainly joints in your upper body, like hands and wrists, the disease may have less impact on your running than if it affects your feet and knees.

Additionally, because it is a systemic disease affecting more than just your joints, issues like fatigue may be a factor and you may need to dial back intensity, duration, or mix in cross-training, based on how your body feels.

However, Sparks, also a recreational runner himself, recognizes that with any physical activity, the benefits extend past your physical health and are important for your quality of life. He sees rheumatoid arthritis patients often, especially at the beginning, to get to know them and try to optimize their treatment plans. “The bottom line: If there’s an activity that’s really important to a patient, rheumatologists really want to do everything we can to give the patient the best chance to maintain that activity,” says Sparks.

Due to the very individualized nature of RA, symptoms, severity and even joints affected, it’s difficult to determine a guideline for when you should skip a run or workout, Sparks says. It might be best to put a pause on running during flares, but detecting a flare can be difficult and they can vary in severity, he adds.

Conti cautions that if you do see increased joint damage in X-rays, MRIs, and bone scans, it might be time to discuss your training plans with your doctor as modifications might be needed to prevent more harm to the joints.

Conti also involves her medical team in her decisions to compete in endurance races to ensure she is not doing harm to her body. If running doesn’t feel good on a given day, she will skip or swap activities. It’s not about how many days a week she can run or what her paces are, she says, though she continues to qualify for the Boston Marathon. Instead, it’s the feeling that despite having RA, when she is running, her body is working for her. Living with a chronic disease has made her even more appreciative of what her body can do, she says.

Since her diagnosis, Conti has used her skills as a fitness professional and educator to promote physical activity among people with autoimmune diseases and hopes her successes and her positive attitude will inspire others to keep moving in whatever way works for them.

As for the Boston Marathon, Conti says she made a promise to herself she would run every year she is able. “If I’m healthy enough to do this, I’m going to do it,” she says. “Because one day, I’m not going to be able to and guess what, today is not that day.”