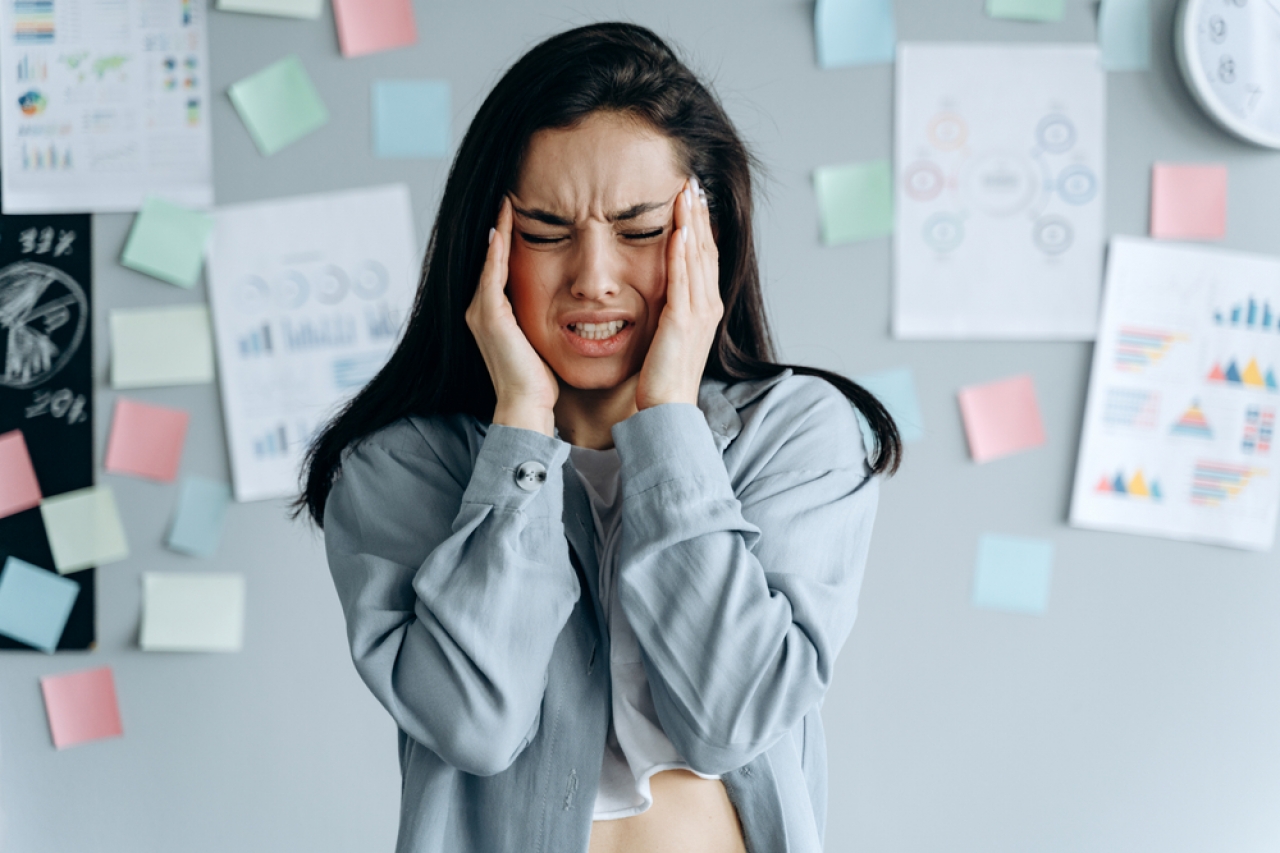 I've suffered from migraine headaches since I was in my early teens. Over the years, I've missed out on much-anticipated trips, concerts, and family parties as I lay in bed with my head throbbing and the lights off. Migraine makes it nearly impossible to plan in advance and turns you into a flaky friend, which takes a toll on your relationships.

I thought I had tried everything-Advil, beta-blockers, Topamax-but none of them gave me the results I was looking for. Then a few years ago, my neurologist suggested I try Botox to manage my migraines. I knew about the drug's wrinkle-reducing effects (I watch the Real Housewives franchises and Keeping Up With the Kardashians, after all), but I didn't know that the same drug is a well-regarded preventative treatment for chronic migraine.

Admittedly I was hesitant about getting dozens of shots injected into my head, neck, and shoulders on a regular basis, but my misery made me open to trying it. Despite my initial concerns, Botox shots have completely changed how I control my migraine attacks. Though I'm still good for one or two migraines each month, Botox has drastically reduced the frequency of these attacks.

If you're a fellow member of the migraine club, please accept my sympathy, and then read up on these must-know points about Botox for chronic migraine.

Most people believe a migraine is just a bad headache, but it can be more than that. According to the American Migraine Foundation (AMF), a migraine (sometimes just referred to as "migraine") is a "disabling neurological disease with different symptoms and different treatment approaches compared to other headache disorders."

It's also important to note that, while some headaches can be the cause of underlying conditions (those are known as secondary headaches), migraines are usually their own thing. "Migraine is the most common primary headache disorder, which means that it's not happening because of a tumor or an infection. It's just how your brain is wired," Umer Najib, MD, a board-certified neurologist and the director of the headache medicine fellowship program at West Virginia University, tells Health.

"Pain is often the predominant symptom, though many patients have other symptoms that can actually be more bothersome than the pain itself," says Dr. Najib. Ferhad Bashir, MD, a neurologist with Mischer Neuroscience Center at Memorial Hermann The Woodlands Medical Center in Texas, goes a step further: "It's a state of misery," he tells Health. "During that time period, you're not yourself. If you're at work, you can't produce at your optimum level. If you're a parent, you can't enjoy time with your kids."

Those additional symptoms, aside from often disabling pain, include:

It's not entirely clear what causes migraine, though researchers believe that there's a genetic component to the neurological condition, according to the US National Library of Medicine's MedlinePlus resource. But the condition-which affects more than 37 million people in the US alone-is thought to have quite a few triggers, including stress, anxiety, caffeine (or caffeine withdrawal), and certain medications.

Migraine is also about three times more common in women, per the AMF, which points to a possible connection to fluctuating hormones. "For a lot of women with migraine, menses can trigger an attack," Megan Donnelly, DO, a board-certified headache specialist and neurologist, and the director of headache and women's neurology at Novant Health in Charlotte, North Carolina, tells Health. "We also have changes in migraine frequency in pregnancy and postpartum, as well as related to perimenopause."

There's no cure for migraines, per MedlinePlus. Instead, treatment mainly focuses on relieving symptoms and preventing or lessening future attacks through a combination of medications and lifestyle changes. This, in some cases, is where Botox-aka Onabotulinumtoxin A or Botox A-comes into play.

Botox is a preventative therapy for migraine, meaning that it can reduce the frequency of migraine, but it won't stop one once it's begun. Though Botox has been an FDA-approved treatment for chronic migraine for more than a decade, per the AMF, the science behind how it battles the disease is still a bit of a mystery.

Technically speaking, the AMF says that Botox is injected into the pain fibers in the head, neck, and back that are involved in headaches. That Botox then blocks the release of chemicals involved in pain transmission, which then prevents activation of pain networks the brain.

Why Botox works in this way, however, is still not well understood. "We have animal data that shows that Botox causes a change in a certain type of calcium channel in the meninges, which is the covering of the brain as well as the critical part of the migraine process," says Dr. Najib. "We think that's how it suppresses migraine."

Despite Botox's efficacy (patients reported that two rounds of shots reduced their headache days by roughly 50 percent, per the AMF), Dr. Najib notes that the drug isn't a cure-all. "As long as the disease is still active, you'll have breakthrough headaches," he says.

Because of that, some patients find that they need another preventative treatment, like an oral medication, in addition to their shots. It's also common to need a rescue drug, and the risk of drug interaction is minimal.

Choosing a treatment of preventative method for migraine is a highly personal choice that should be done in close contact with your doctor. Here's more of what I learned about Botox and migraine during my own journey-and what I want those considering the treatment to know.

Botox is FDA-approved to treat chronic migraine in adults, which is defined as more than 15 migraine days per month. It's not approved for other kinds of headaches, like tension or cluster, nor is it approved for children or adolescents (if it's used for them, it's considered "off-label use").

Though migraine symptoms vary from person to person, Botox for migraine is standardized. Every three months you'll receive 31 shots (yes, you read that correctly) totaling up to 155 units of Botox. This includes injections in specific spots in the forehead, temples, back of the head, neck, upper back, and shoulders.

If you've got a particular concern, like muscle spasticity or tightness in the shoulders, your provider may adjust the shot pattern to tackle that specific issue.

If Botox is working for you, there's no known health risk associated with staying on it indefinitely, though it's not approved for people who are pregnant or breastfeeding because of minimal studies in these groups.

"Botox injections can occasionally trigger a headache, muscle weakness and neck pain, but this is rare," Kerry Knievel, DO, director of the Jan & Tom Lewis Migraine Treatment Program at Barrow Neurological Institute in Phoenix, Arizona, tells Health. "Eyelid and eyebrow asymmetry and droop can happen, but to prevent this we recommend that patients refrain from rubbing their foreheads or wearing a hat for 24 hours after their injections to prevent the Botox from spreading from the area we intend for it to be."

In fact, Botox's limited side effects are part of its appeal. "It's not addicting. You don't have to take a pill every day. It doesn't work for everyone, but it does work for a significant amount of people. That's why Botox is amazing," says Dr. Bashir.

Because it's an FDA-approved treatment, your health insurance may cover all or most of the cost of Botox, though this depends on your specific plan. The drug manufacturer also offers asavings program that can help offset some of the expense.

To get approval, your insurance company may want to see that you've "failed" on two or three oral preventatives first. You may also need to keep a headache diary (I track mine in a note on my phone) that shows you're having 15 or more headache days per month.

Once you've started the shots, your insurance will probably require documentation of improvement to continue paying for the treatment. Depending on your plan, you may also need to come for a follow-up visit between shots.

Note, however, that if Botox is used as an off-label treatment (meaning it's used in a way not approved by the FDA, like in children or adolescents), insurance companies may not cover it, per the AMF.

If you don't experience relief from migraine right away, don't swear off the treatment immediately. Dr. Najib recommends trying two rounds of Botox before making a decision about whether it's working for you. Even if the treatment ends up helping after the first round, he says results typically take two to four weeks to kick in. There's no taper required to discontinue the treatment.

Though the same drug is used for both migraine prevention and cosmetic purposes, the amount and placement of Botox varies depending on your goals.

You may find some level of relief when you get Botox for cosmetic purposes. However, when you receive Botox from an esthetician, you're not getting injections in the same spots as you would in a doctor's office. This means you'll miss the drug's full migraine-busting effect.

This is where it gets a little murky, and opinions vary depending on who you ask. The manufacturer of Botox recommends not exceeding 400 units in a three-month span. Since your neurologist will administer 155 units, technically you have wiggle room if you want to visit an esthetician for Botox, too. However, this can be problematic.

"There is a theoretical risk of developing antibodies to Botox if it's given more frequently," explains Dr. Donnelly. If you'd like to do both, it's best to check with your provider before booking an appointment with your esthetician.

Overall, if you're finding yourself planning your life around your migraines, you may want to make it a point to chat with your doctor about using this multitasking drug to reduce the frequency of the attacks. I know doing so has drastically changed my life-and it might help you, too.

To get our top stories delivered to your inbox, sign up for theHealthy Living newsletter